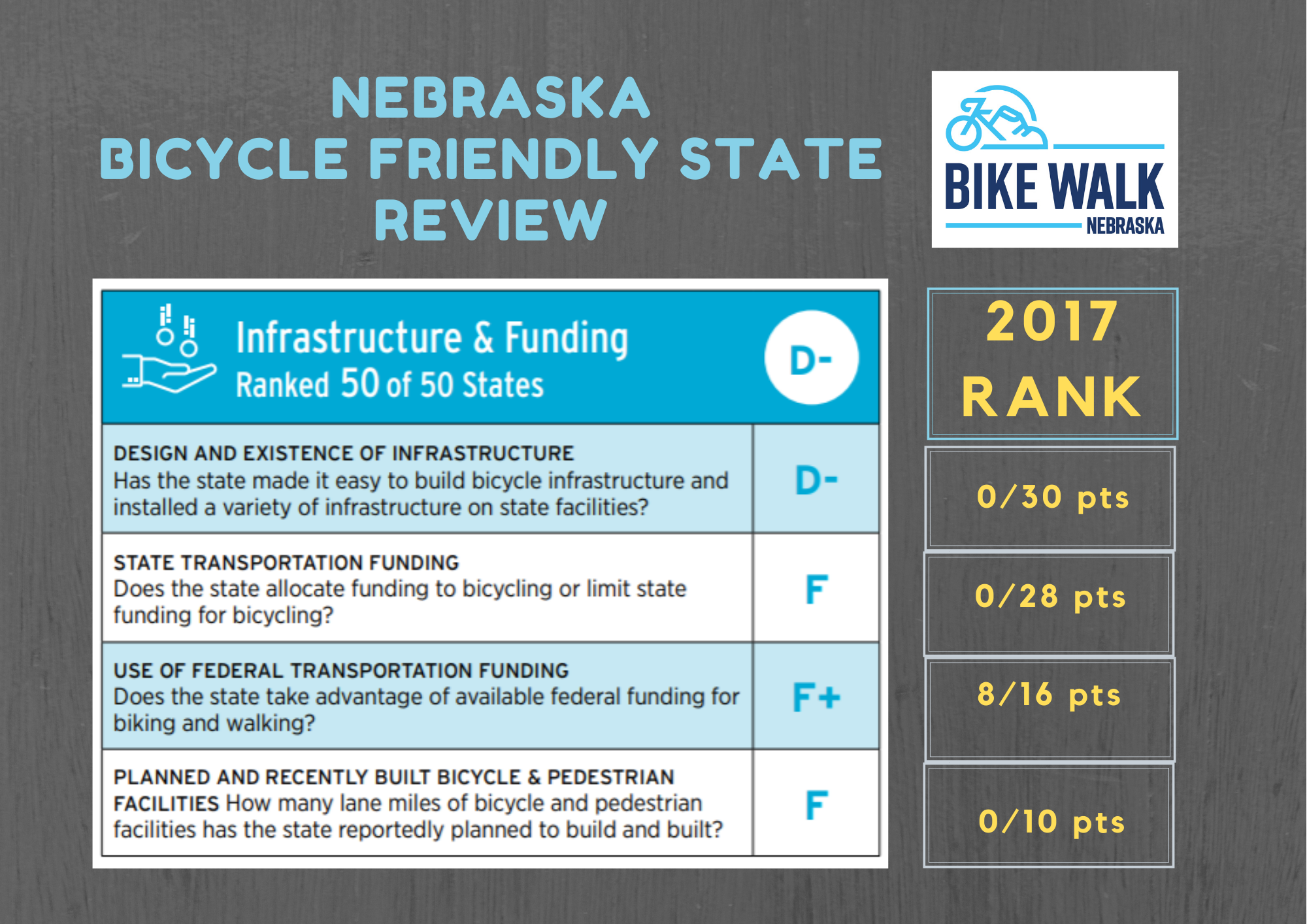 I’ve been doing this work for over a dozen years, and I’ll be honest: I can’t say that I fully understand  the intricacies of the many ways transportation funding flows through federal, state and local governments and the MPO’s (metropolitan planning organizations) that exist in the urban areas. For this reason, I make it a practice to surround myself with people much smarter than I am, who in this case is Michael Helgerson, Transportation and Data Manager at the Metro Area Planning Agency in Omaha. Mike is my go-to guy when it comes to questions on these topics.

As you can see on the report card, we have not really improved since 2017 in this category, but we do see some positive movement.

Helgerson sees progress with some of Nebraska Department of Transportation’s federal funding being spent on projects that improve safety for people biking and walking. He noted that some of the funds designated for congestion mitigation and air quality have been used to fund things like bike share and bicycling encouragement and messaging campaign programs. State money from the Highway Safety Improvement Program has been used to fund pedestrian countdown timers for signals in Omaha and Lincoln.

On the other hand, many Safe Routes to School and trail projects awarded Transportation Alternatives Funding (and Transportation Enhancement Funding before that) have been stuck wandering in a bureaucratic desert for years, creating a backlog that has impacted the ability to call for new projects. By the time one of these projects finally breaks through, the price tag has inflated and become cost prohibitive.

If you follow us, you know that my hot button issue right now is the safety of state highways that become local roads once you hit the city limits. In the past, the dueling interests of the old Nebraska Department of Roads and city governments have usually resulted in the cities on the losing end: the movement of trucks and cars usually won out over the safety of residents that bike and walk. We need forward thinking design standards and a willingness to invest in features that make these busy streets safer.

Thankfully, there is potential improvement on the horizon. The creation of the state’s new Bike/Ped Advisory committee and the work now underway to update the NDOT Long Range Transportation plan create opportunities to change policies that can improve the safety and accessibility of walking and biking in Nebraska. I have a seat at the table for both of these to represent your interests, and I’m not shy about speaking up. :)

So in summary: we clearly have a long way to go before the state funding and infrastructure in Nebraska reach a level that works for us, but we are firmly in the “cautiously optimistic” camp about the future.