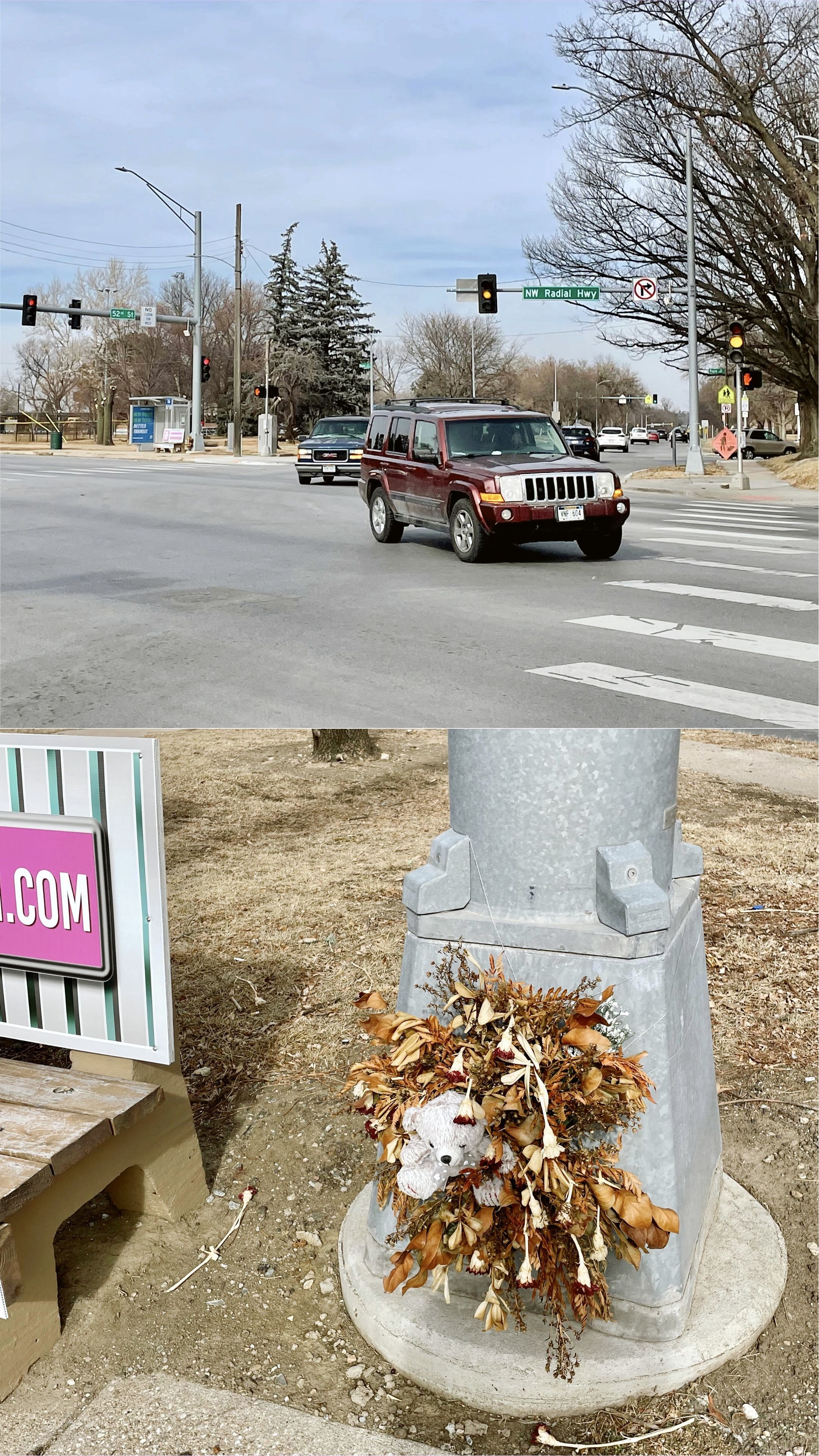 Note: In the next few weeks, our Program Coordinator, Annabelle, will be visiting “hot spots” in Omaha, or places that have heavy traffic and have been deemed unsafe for pedestrians. This is the second in a series of blog posts.

This week I visited N. 52nd St and Northwest Radial Hwy, the intersection near Benson High School, Monroe Middle School and Gallagher Park. Unfortunately, this intersection has made the local news most recently on December 26th, 2021 when 32-year-old Seth Dawson was hit by a driver just outside the intersection and was taken to Nebraska Medicine in critical condition where he later died from his injuries. This was not the first time someone has died at the intersection.

In October 2021, MAPA hosted a virtual Block Talk in the Benson neighborhood and its focus was this intersection. I attended the meeting and reflected on my experiences with the intersection up to that point with the group I was assigned to. I had an ex that lived just north of NW Radial Hwy, so I would sometimes bike there from my house in southeast Omaha. The Google Maps route had me biking through the intersection, so I’ve only really biked in the area. I would say I’m a fairly confident biker on Omaha streets so crossing the intersection back then didn’t seem like a big deal to me other than to be extra cautious and wait for the traffic from all directions to come to a halt before riding through. I may have done this 2 or 3 times.

I decided to walk this intersection for the very first time keeping in mind what participants had discussed at the Block Talk. Some mentioned that even as a driver it feels unsafe driving through the intersection due to the speed of other cars and the curve of the street. Another specifically mentioned the danger of students walking over to the convenience store from the high school and even hanging outside, which is positioned awkwardly in the intersection. I started on the south side of NW Radial and decided to cross to the convenience store. It seemed to me 52nd street traffic was much calmer so I crossed with ease to the other side, feeling confident the cars waiting saw me crossing in the afternoon daylight.

However, crossing NW Radial was intimidating because it is such a long crosswalk that goes through the six lane highway with a concrete divider in the middle. As I crossed I was sure to wait for all traffic to stop before taking my first step as two cars sped through the yellow light and had just left the intersection when the pedestrian light came on. I had about 12 seconds of the white pedestrian light before the red hand came on and started counting down from 32 seconds, and at that point I was about halfway through the crosswalk at the divider. I felt, at that moment, extremely vulnerable in the intersection because just to my right cars were crossing NW Radial going in the opposite direction as me. I’m not sure if holding my phone up as I recorded my walk through the intersection helped, but I did feel as though the cars around me were aware and took things a bit slower. Still, in the long crosswalk I was at the mercy of the cars around me.

When I got to the northside of NW Radial, the first thing that I noticed was a small white teddy bear attached to a dried orange and yellow flower wreath hanging from the base of the traffic light. I took a moment to reflect on the heavy significance and meaning of the memorial - someone’s loved one took their last breath here because of the design and use of this complicated intersection. Walking up to the memorial made the virtual Block Talk and news articles I’ve seen on the deaths in the intersection that much more real. It reminded me of the importance of walking (or biking, skateboarding, scootering, etc.) in an area because you get a completely different perspective on the ground than you would if you just drove past.

After crossing the four crosswalks at the intersection I darted back to my car. I was surprised how much that took out of me and didn’t realize it until I felt safe sitting in my car. This was my first time walking the intersection but I know many people walk, roll, and use transit near here every day to get to school, work, businesses, and more. There were many proposed projects and improvements that can be made in this intersection, as well as along NW Radial Hwy, that came out of the Block Talk. As a state highway, a bit more goes into changes that involve the state of Nebraska, city of Omaha, and stakeholders.  I’m unsure what the next steps are but we will continue pushing the conversation and supporting the business district and neighborhood association to prioritize and apply short and long term projects in the area.

For more information on the area:
https://arcg.is/1OK9OX0