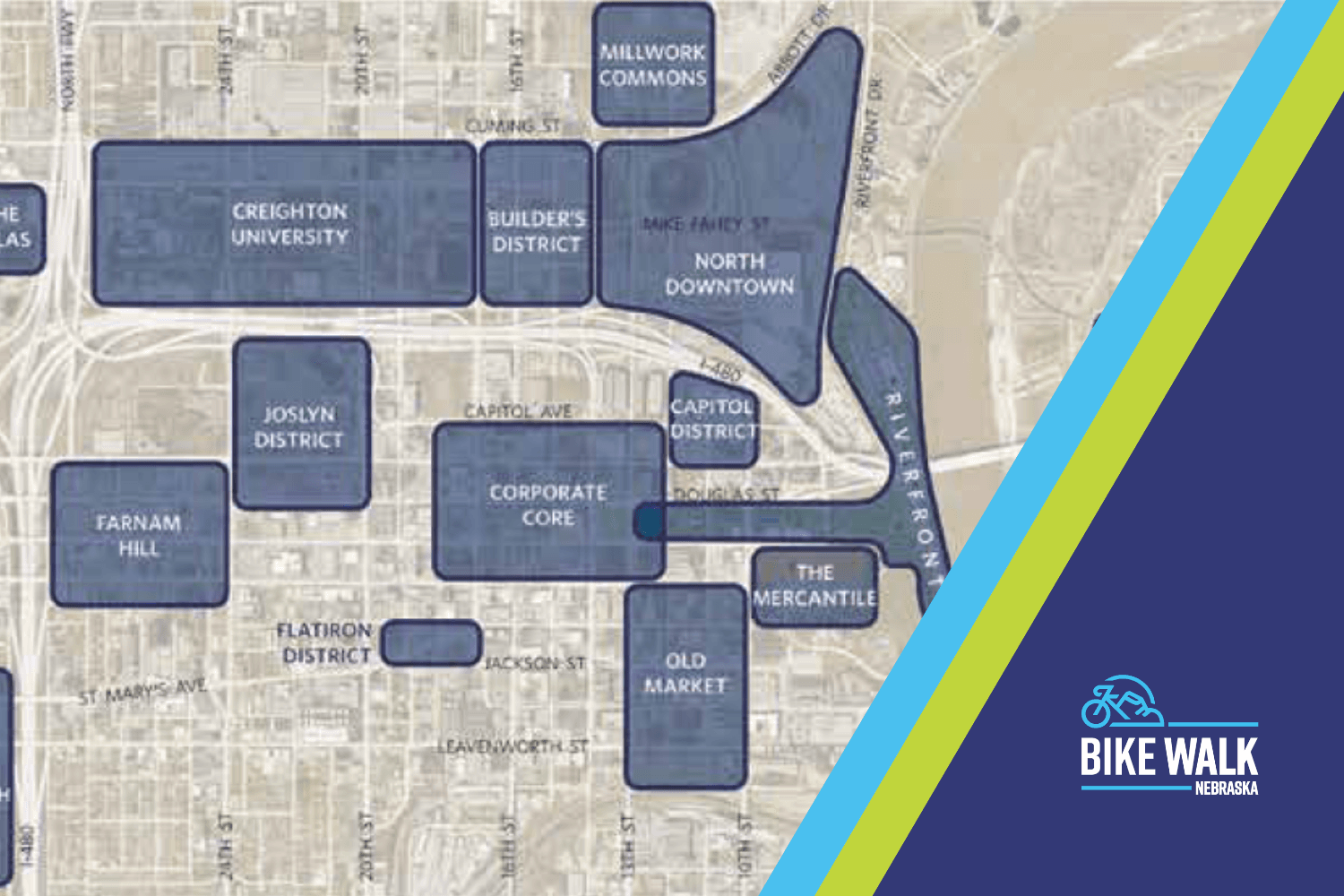 The Builder's District is coming to downtown Omaha, and with it comes a focus on environmentally friendly construction, greenspaces for residents and key destinations, like a much-needed grocery store.

Even more promising is the location: Cuming Street to Cass Street and 17th Street to 14th Street. This urban core project will sit right where the Baby Bob Bridge and, therefore, the Bob Kerrey Pedestrian Bridge, Benson Bikeway, and North Omaha Beltline Trail will converge.

It could be a bike infrastructure and connectivity bingo.

Whenever a new development comes along, the opportunity for infrastructure such as bike lanes and parking will never be easier (or cheaper) to install. It’s also not a half-bad investment. Active transportation infrastructure brings high levels of return in the form of increased property values, decreased healthcare costs, higher retail sales for surrounding businesses, and, most notably for developers, fewer commercial vacancies.

The changes seem to be making a big difference, but they don’t expect to see the full impact of the changes until 2023.

As an Urban Core project, the Builder's District has the opportunity to align with the project's focus on total mobility and to help address the issue of I-480 "as a barrier between the adjacent neighborhoods – limiting bicycle and pedestrian crossings and negatively impacting development potential."

The demand exists. Various national studies indicate that 60% of people wish they could use their bicycles for transportation but don’t feel safe doing so. Also, in our recent report on the Market-to-Midtown Bikeway, we saw a 31% increase in ridership across the Omaha region since 2019 and a 140% increase in bicycling along the Harney street corridor. Omahaians are hungry for bike infrastructure, and if built, bicyclists will come.

But, even for people who never plan on picking up a bike - bike lanes are still beneficial. If you've ever had to drive behind a group of cyclists on the road, you know what I'm talking about. Having allocated space for cyclists lowers traffic congestion, keeps them off of sidewalks, and bicyclists bring up to five times more revenue than drivers to surrounding businesses.

The Builder’s District renderings show massive amounts of parking structures, which seems to be a disconnect between the vision for safe walking, green space, and an environmentally-friendly district.

A parking garage costs $28,000 per spot on average, making it one of the most inefficient infrastructure investments. The cost of the parking tends to go back on the residents or visitors. In comparison, bike parking takes up ten times less space than car parking, and the cost is 30 to 300 times less.

Building an accessible and successful bike network throughout our city takes all community stakeholders working towards the shared goal. It's why a Complete Streets Policy in Omaha exists.

We're looking forward to learning more about this development project and the opportunities it brings for connectivity and investments being aligned with the shared visions and goals of all of Omaha.