It's Gotta Be Harney 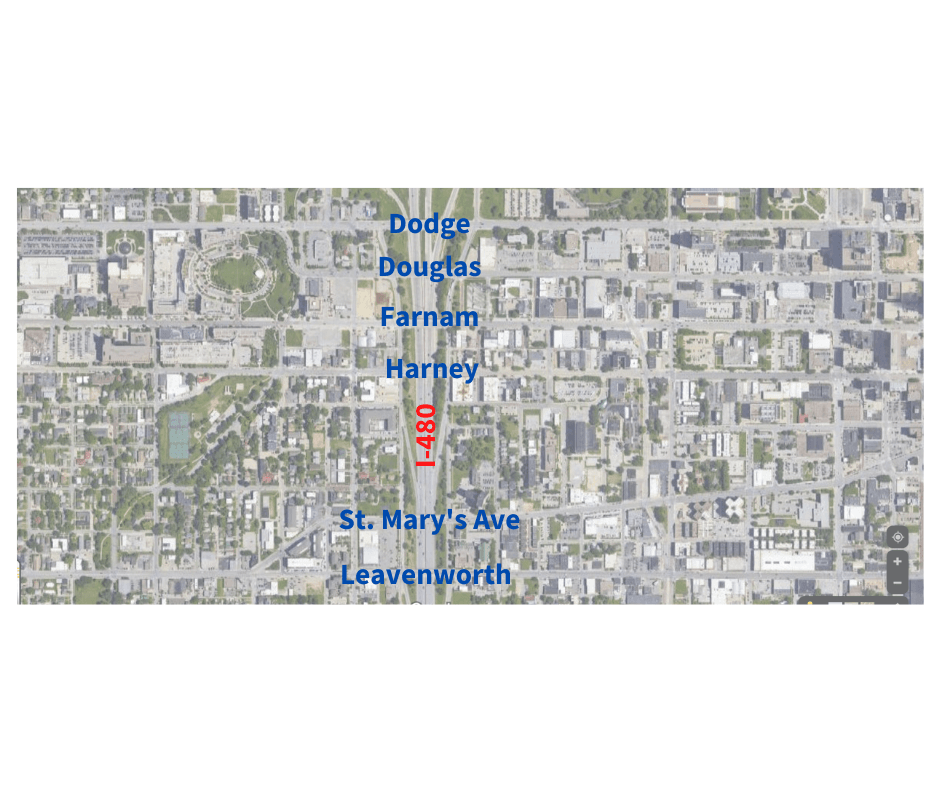 Things continue to develop quickly in Omaha with the Harney Street corridor where the Market to Midtown Bikeway protected bike lane pilot project has been in place since July 2021. With the pilot timeframe coming to a close, we have suggested a path forward that would keep the lane in place in the interim until construction begins on the streetcar.

This interim plan would require coordination with the City of Omaha, and today the City Council voted 6-0 to approve the amended resolution that was on last week’s agenda.

The conversation among council members mostly centered on the resolution’s language which proposes the possibility of locating this lane on a different street within the urban core. We have stated many times that we believe the best option to make the protected bike lane permanent is to keep it on Harney Street and to include it in the overall plan for the corridor as the streetcar design is developed. The resolution approved by the Council refers to locating a permanent bike lane “in or near the Redevelopment Plan Area” which might make some feel like there are several options on the table in terms of location. But are there?

The conditions needed for us to build the pilot protected bike lane:

Space. The amount of traffic on Harney did not necessitate the number of traffic lanes and there was a full lane’s worth of space to give for the Bikeway to be constructed.

Access over I-480. There are only so many streets with bridges that allow a person to connect from ‘Market to Midtown’.

A local street. Several streets in the urban core are technically state highways, which are legally under the purview of the state department of transportation. That’s not to say that changes can’t be made, but it adds several more hoops to jump through in the process.

Connectivity to key destinations. The original vision for this pilot project was to find a corridor that would create a bike connection between downtown and UNO, with UNMC being a significant destination in the middle.

What options does that leave us if the full length of this protected bikeway is to remain within the redevelopment area?

Douglas is a state highway. Farnam does not have enough space, let alone with a streetcar line added. St. Mary’s Ave does not connect all the way through. Leavenworth does not have enough space even if utilities could be moved - an idea too costly, as the City Public Works department has been telling bicycle advocates for 15+ years now. Cuming is a state highway. Burt is an existing and much used bike route, but has additional challenges as Creighton’s campus master plan continues to evolve. And of course, Dodge is Dodge.

That leaves us with Harney. Not only is the only street that meets the criteria above, it plays a key factor in the recently updated UNMC Facilities Master Plan and the Project NeXT expansion which the City of Omaha has committed $93 million to support, “including streets.” UNMC has a stated goal of getting 35% of people to campus daily in modes other than single occupancy vehicles. They are currently achieving 25% mode split, which is amazing, through their Travel Smart program. If the City committed to partner with UNMC in ways that “include streets,” we need to make sure protected bike lanes are part of the picture to help them achieve their goals..

We don’t yet know the specific design details of the streetcar. We do know there is room for both a streetcar and a protected bike lane on Harney.  A streetcar located within an urban core will of course create potential conflicts between all modes of transportation at every intersection; obviously, the engineers designing the streetcar route will be factoring in how people walking or using bikes, scooters or assisted mobility devices cross the tracks. As we said at the public hearing on the 13th, Bike Walk Nebraska would like to be at the table to provide feedback on these issues during the design process. Bike lanes and street cars coexist in many places; Omaha would certainly not be the first to tackle this issue.

Bottom line: the pilot protected bike lane should remain on Harney in the interim while the streetcar plans are being made. If the street is going to be torn up for the streetcar in 18-24 months anyway, let’s bolt down the flexible delineators so maintenance will be easier and less costly in the interim. Finally, let’s also not lose sight of the fact that we need to make sure we aren’t just talking about one lane in Omaha’s urban core; we need a network of protected lanes for multi modal transportation to reach its full potential.

Stay tuned and stay engaged, Omaha. We still have a long way to go, but today is a step in the right direction.