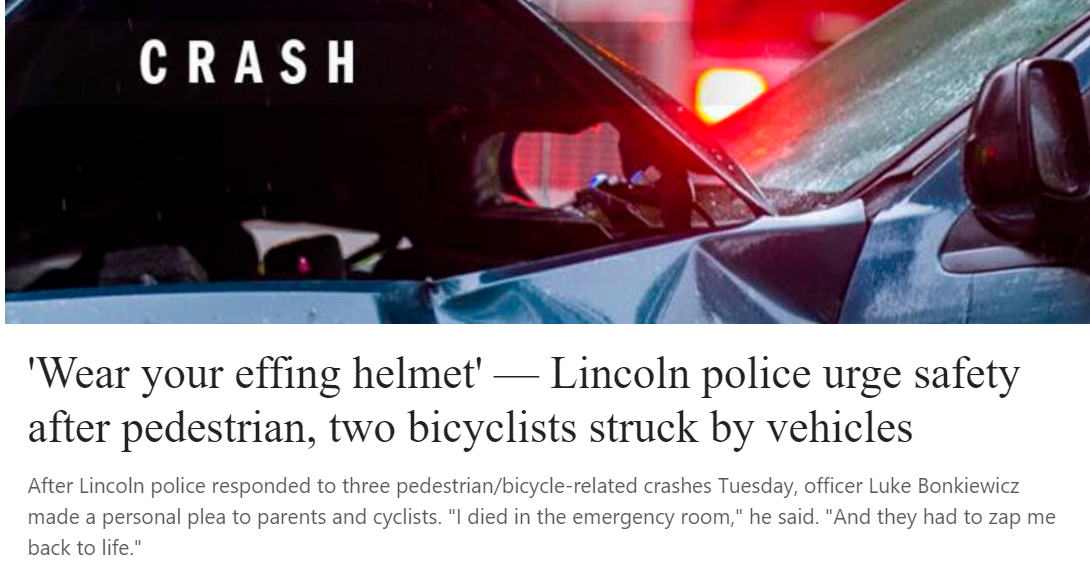 Having said that, we would also like to make this crystal clear: Bike Walk Nebraska strongly recommends AGAINST law enforcement officers emphatically telling people to “wear an effing helmet” when working in an official capacity  discussing crashes involving people walking and biking. (Note: the LJS article linked has been edited; in the original piece, the officer was said to have pounded his hand on the podium, forcefully exclaiming, “Wear your effing helmet!” in the context of the life threatening crash he personally experienced and as mentioned in the subheading above.)

Here are the facts according to the Lincoln Journal Star about a really bad day for people biking and walking in Lincoln on Tuesday:

Incident #1, 4:12pm, broad daylight across the street from a school playground: “As a 12-year-old boy on a bicycle entered the north end of the crosswalk, heading across C Street, a Ford Fiesta driving around 40 mph in the 25 mph zone struck the boy after braking, according to the crash report. The driver told investigators that he didn't see the boy until it was too late…(the boy) was taken to the hospital with abrasions and other non-life-threatening injuries."

Our response: First, thank goodness these were non life-threatening injuries. Second, let’s look at what the law says. State statue 60-6,153, states, “the driver of a vehicle shall yield the right-of-way to a pedestrian crossing the roadway within a crosswalk who is in the lane in which the driver is proceeding or is in the lane immediately adjacent thereto by bringing his or her vehicle to a complete stop.”

Where should 100% of the fault for this crash be placed? On the person driving the car.  Would a helmet or fluorescent clothing have prevented this? No.

Incident #2,  5:18pm, broad daylight, residential area : “...a 16-year-old driver heading eastbound on Morrill Street struck a 43-year-old woman walking in the crosswalk … (she) was transported to a local hospital with serious but non-life-threatening injuries.” (Note that there is conflicting information about the cross street, but it is somewhere between 63rd and 65tth & Morrill Ave.)

Our response:  We hope the woman recovers fully from the serious injuries. And again, we ask:  Where should 100% of the fault for this crash be placed? On the person driving the car who is required by law to stop for the pedestrian.

Incident #3, 6:11pm, broad daylight, residential area : “A 7-year-old boy was struck while riding his bicycle. Witnesses told police that the boy darted out into Lake Street near 20th Street, as a 41-year-old man was driving westbound down Lake Street through the intersection...The bicyclist was taken to an area hospital with non life-threatening injuries.”

Our response: Thankfully, injuries are listed as non-life threatening. The article says the boy “darted out,”  which is a common response from people who hit others with their car. It is often another way of saying, “I just didn’t see him until it was too late.” (See incident #1.)  Where should the fault be placed here? We won’t place blame in this situation without all the facts and seeing the crash report. However, a person driving a car in a residential area is required by law to be doing so cautiously, and watching out for vulnerable road users, especially children.

As a result of this bad day, LPD was quoted in the article as “pleading with pedestrians to wear bright clothing, use sidewalks when possible and keep headphone volumes low.”

It seemed as though everyone in Lincoln was reading the article at the same time given how our phone started blowing up with frustrated people weary of the perceived victim blaming.

The point is this: if the persons driving the vehicles in these three incidents had been following the law, the crashes would most likely not have happened.  No amount of helmets, fluorescent clothing, music being played on a speaker instead of headphones or otherwise likely would have changed the outcome. Furthermore, it is unreasonable and unfair to expect people to suit up in bright clothing every time they want to take a walk or ride their bicycle in their neighborhood.

Our responses to crashes involving people biking and walking  MUST change; people in cars are required to share the road and the law requires vehicle operators to be aware of their surroundings at all times. Let’s make sure to focus the attention on where it belongs: on those who were either breaking the law or acting irresponsibly as vehicle operators.